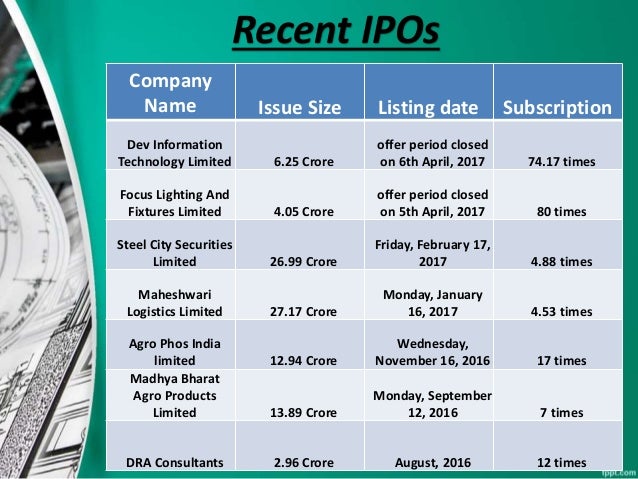 As a welcome development for the Indian small and medium enterprises (“SME”), the Indian securities regulator, Securities and Exchange Board of India (“SEBI”), recently allowed listing of SMEs without any requirement of an initial public offering (“IPO”).

Existing framework and evolution of the ITP Regulations

Chapter XB of the ICDR Regulations provides for issuance of specified securities by SMEs on SME exchange.1 Broadly, an SME was required to make an IPO without having to file the draft offer document with SEBI.

Do i have to pay capital gains on cryptocurrency

Although, criteria’s which were otherwise applicable for listing of companies on the SME exchange, like minimum net worth, profitability and tangible assets, etc., were waived, onerous conditions such as requirement for promoters to dilute 25% of their stake, compulsory market making for three years and underwriting 100% of the issue, with the merchant banker himself underwriting directly up to 15% of issue size still remain.

These factors, in addition to the additional qualifications that were introduced by the BSE and NSE, significantly discouraged the issuers from going public on the SME exchange, especially considering the cost of issuance, minimum track record requirements, profitability requirements, etc.

Taking a cue from this year’s budget speech where the Hon’ble Finance Minister of India announced that a new set of regulations shall be framed for allowing listing of start-ups and SMEs without undertaking an IPO, SEBI, in its Board Meeting held on June 25, 2013, approved the said listing on the ITP without an IPO.

In the said meeting, SEBI noted that the ITP Regulations are aimed to provide an easier exit option for informed investors, provide better visibility, wide investor base and greater fund raising capabilities to start-ups and SMEs.

Salient features of the ITP Regulations

Such SMEs may list on the ITP without having to comply with the requirements for listing of securities on a recognized stock exchange under sub-rule (7) of rule 19 from clause (b) of sub-rule (2) of rule 19 of the Securities Contract (Regulation) Rules, 1957 (“SCRR”).

Hence, listing of specified securities can be achieved without an IPO and the expenses associated with it.

Following are some of the key facets of the ITP Regulations:

Eligibility criteria: For SME to be eligible to list its specified securities on the ITP, the following requirements should be satisfied:

No winding up petition against the SME should have been admitted by a competent court. 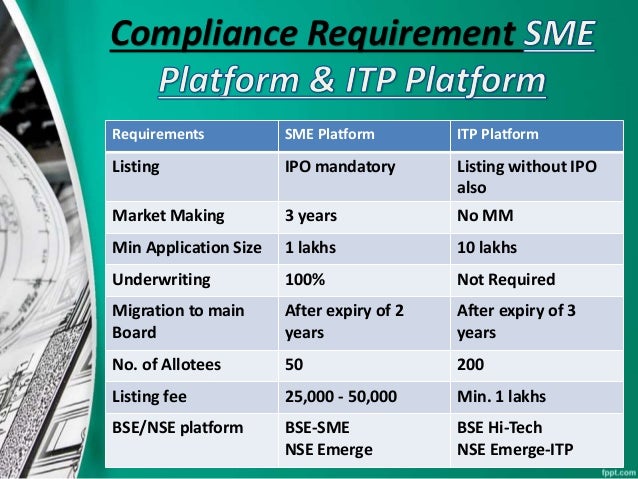 Information document: Along with the application to a recognised stock exchange, the eligible SME proposing to list on the ITP shall also be required to file an information document containing certain specific disclosures relating to, inter alia, description of business, specified financial information, risk factors, assets and properties, ownership of beneficial owners, details of directors, executive officers, promoters and legal proceedings.

Further, the SME cannot undertake an IPO while its specified securities are listed on the ITP.

Before raising money through private placement, amongst other stipulated conditions, SME should procure an in-principle approval from the recognised stock exchange and also a shareholders approval by special resolution and subsequently the allotment of securities has to be completed within two months of obtaining such approval.

Such an in-principle approval from the recognised stock exchange is also required prior to a rights issue.

Lock-in of promoters stake: At least 20% of the post listing capital is required to be held by the promoters of the SME which shall be locked-in for a period of three years from the date of listing on the ITP.

Ticket size: The minimum trading lot on the ITP has been set at INR 1,000,000 (Rupees One Million Only).

Exit from the ITP: SME listed on the ITP may exit from it if: (i) its shareholders approve such exit through a special resolution with 90% of total votes and the majority of non-promoter votes in favour of such proposal; (ii) the recognised stock exchange where its shares are listed approves such exit.

However, the stock exchange may grant 18 months’ time to the SME to delist from the platform on occurrence of the events specified in this paragraph.

The ITP Regulations should go a long way in providing the necessary stimulus in the growth of SMEs which in turn will help in variety of facets in addition to fostering of innovation. The new platform should aid SMEs in getting access to capital as well as wider visibility. As the mode of exiting from the platform is also relatively simplified, the migration to the main exchange would possibly be much smoother for a company whose specified securities are listed on the ITP of a recognised stock exchange.

As SEBI had indicated in the Board Meeting of June 25, 2013, the ITP Regulations are framed with the intention of allowing easier exit options for the informed investors who risk their capital to support SMEs.

Among other things, specifically the conditions specified in 1(d) of this Hotline will enable a number of angel investors and venture capitalists to explore the avenue of getting their eligible portfolio companies listed on this new platform and thereby seek an easy and efficient exit. Further, non-applicability of certain onerous conditions, as in case of listing under Chapter XB of the ICDR Regulations or with respect to listing on the main exchange, will encourage a number of start-ups and SMEs to explore the option of getting their specified securities listed on the ITP.

This platform is certainly likely to see some action in the near future due to certain encouraging aspects such as no restriction from raising further capital by private placement or rights issue, non-applicability of Takeover Code and Delisting Regulations to the SME whose specified securities are listed on ITP, etc.

Regulation 106N(1)(a) of the ICDR Regulations defines ‘Main Board’ as a recognized stock exchange having nationwide trading terminals, other than SME exchange.